Many starter campaigns can be a deadly landscape, but you can avoid boredom by using unique D&D Monsters for Killer Level 1 encounters. Dungeons & Dragons 5th Edition has a plethora of source books and expansions to help plan your future Homebrew masterpiece.

Even experienced Dungeon Masters need a hand now and then to manage world-building. This includes creating encounters from scratch.

We’ve all been there. Starting the adventure at level one and facing wave after wave of Goblins, Orcs, Wolves, and Kobolds. Don’t get me wrong these classic Monsters are popular staples of the genre and a dependable option for a reason. They fit so many settings and scenarios.

If it works, it’s entertaining and it isn’t broken then why fix it?

There may come a time when you want your Homebrew campaign to take a left turn into undiscovered territory. A time when skeletons, zombies, rats, and Bandits just aren’t going to cut it.

That is where THIS collection of Beasts and Monstrosities comes in handy. This collection of D&D Fifth Edition Monsters is CR 0-1 and perfect for any Level One Party.

Cacklers: An annoying Foe for the World’s greatest roleplaying game

The Cacklers are small, jabbering jesters that spice up Rakdos performances with their chaotic antics. Their incessant cackling can inspire uncontrollable laughter by making everything — even the most horrifying spectacles — seem hilarious.

Some cacklers excel at vocal mimicry and perform as impressionists; others put their sadistic bent to use by lurking in shadows and terrifying passersby. Rakdos performers enjoy dressing cacklers in a variety of masks, hats, and costumes to lampoon public figures.

Cackler stats can be found in The Guildmasters’ Guide to Ravnica.

The Abyssal chickens are carnivorous, temperamental, tasty bottom-feeders native to the Abyss. They beat their leathery wings to scare predators and to help them run faster, and they taste like fatty chicken.

With your permission, a character who casts the find familiar spell can henceforth choose to conjure an abyssal chicken instead of a raven.

Abyssal Chicken stats can be found in Baldur’s Gate: Descent into Avernus.

Boggles: A Monster from the Feywild

The Boggles are the little bogeys of fairy tales. They lurk in the fringes of the Feywild and are also found on the Material Plane, where they hide under beds and in closets, waiting to frighten and bedevil folk with their mischief.

A boggle is born out of feelings of loneliness, materializing in a place where the Feywild touches the world in proximity to an intelligent being that feels isolated or abandoned. For example, a forsaken child might unintentionally conjure a boggle and see it as a sort of imaginary friend. A boggle might also appear in the attic of a lonely widower’s house or the caves of a hermit.

Boggle stats can be found in Volo’s Guide to Monsters.

Brigganocks: Something Wild to challenge the party

The Brigganocks are frantic, mouse-sized creatures that live in mines. Whenever a mortal makes a nonmagical wish, perhaps while blowing out the candles on a birthday cake or tossing a coin down a well, an echo of that wish becomes lodged in a stone buried deep in the earth of the Feywild.

Brigganocks seek out these wish stones, discarding the ones that contain wishes of ill intent and keeping those that hold good wishes. The Brigganocks refine wish stones into gems and use them to decorate their architecture and crafts, or they trade them to other Fey for food and favors.

A more powerful Fey creature can use a wish stone to scry on the maker of the wish, empower a supernatural charm, or provide the spark needed to create an animated object. Other uses are possible as well.

A Brigganock’s soul lives outside its body, manifesting as a bulb of pale light that floats alongside it and helps the Brigganock see in the dark. Brigganocks have minor spellcasting abilities that help them survive. They also can manipulate time, allowing them to accomplish hour-long tasks in a matter of seconds, though a Brigganock must rest between these bursts of temporal acceleration.

Brigganocks like to nibble on cheese, lettuce, and other soft foods. They eat quite a lot for creatures of their size and never turn down a good meal.

Brigganock stats can be found in The Wild Beyond the Witchlight.

Choker: A creepy alternative for your Dungeon Crawl

The choker is a subterranean predator far more dangerous than its small size and spindly, rubbery limbs would suggest. Chokers have cartilage rather than a bony skeleton.

This flexible internal structure enables them to easily slip into narrow fissures and niches in the walls of their cavern homes. They lurk in these spots, silent and unseen, waiting for prey to happen by. A choker’s usual method for luring prey involves positioning the body of its latest catch just outside its hiding spot.

Whenever it gets hungry, it tears off a few chunks of flesh to feed itself. In the meantime, the corpse serves to entice another curious folk—explorers from the surface world, drow, duergar, or the choker’s favorite prey, goblins—to come within reach. When a target presents itself, the choker’s starfish-shaped hands dart out of its hiding spot, wrap around the victim’s throat, and pin the unfortunate creature against the cavern wall.

Because its arms are so long, the choker can keep its body deep inside the crevice where it hides, beyond the reach of most normal weapons. Chokers tend to set their ambushes alone, rather than working in concert, but where one choker is found, others are likely to be nearby. They communicate through eerie, keening howls that travel long distances through caves and tunnels but are difficult to identify or locate in a typical echo-filled cavern.

Choker stats can be found in Mordenkainen Presents: Monsters of the Multiverse.

Crawling Claws: Why use the whole Zombie when all you need is a hand

The Crawling claws are the severed hands of murderers animated by dark magic so that they can go on killing. Wizards and warlocks of a dark bent use crawling claws as extra hands in their labors. Magical Origins.

Through dark necromantic rituals, the life force of a murderer is bound to its severed hand, haunting and animating it. If a dead murderer’s spirit already manifests as another undead creature, if the murderer is raised from death, or if the spirit has long passed on to another plane, the ritual fails.

The ritual invoked to create a crawling claw works best with a hand recently severed from a murderer. To this end, ritualists and their servant’s frequent public executions to gain possession of suitable hands or make bargains with assassins and torturers.

The disembodied hand can then return to its former limb, its undead flesh knitting to the living arm from which it was severed. Made whole again, the murderer acts as though the hand had never been severed and the ritual had never taken place. When the crawling claw separates again, the living body falls into a coma. Destroying the crawling claw while it is away from the body kills the murderer.

However, killing the murderer does not affect the crawling claw. Undead Nature. A crawling claw doesn’t require air, food, drink, or sleep.

Crawling Claw stats can be found in The Monster Manual.

A goon balloon looks like a 5-foot-diameter beach ball with clawed feet. Unblinking eyes on the outer surface of its spherical air sac enable the creature to see in all directions at once. These eyes can produce kaleidoscopic light that tears at the minds of the goon balloon’s foes.

A goon balloon speaks by pumping air through a hidden orifice on its underside. When the goon balloon dies, the air in its sac transforms into a noxious gas that bursts from the corpse, potentially poisoning other creatures nearby.

Although they can seem playful and harmless, goon balloons are quite mean-spirited. They like to observe the suffering of other creatures and orchestrate that suffering, given half a chance.

Goon Balloon stats can be found in Monstrous Compendium Volume One: Spelljammer Creatures.

Lemure: A D&D oldie but a goody

A Lemure arises when a mortal soul is twisted by evil and banished to the Nine Hells for eternity. The lowest type of devil, lemures are repugnant, shapeless creatures doomed to suffer torment until they are promoted to a higher form of a devil, most commonly an imp.

A Lemure resembles a molten mass of flesh with a vaguely humanoid head and torso. A permanent expression of anguish twists across its face, its feeble mouth babbling even though it can’t speak.

Lemure stats can be found in The Basic Rules

The Yeti tykes are as volatile and mean as their parents, their fearsomeness diminished only by their size. Standing 3 feet tall on average, they like to bully creatures of their height or smaller. But they are easily intimidated by bigger and stronger creatures.

A cowed yeti tyke can be controlled, at least for a while, but raising one to be anything other than a savage, flesh-eating predator is incredibly difficult (though not impossible).

Yeti Tyke stats can be found in Icewind Dale: Rime of the Frostmaiden.

The Pterafolk (pronounced TAIR-eh-folk) are 10-foot-tall, winged, reptilian bipeds native to Chult. Malevolent isolationists regard most other creatures as their enemies. In Chultan culture, Pterafolk are often referred to as “terror folk” for their habit of swooping down from the sky to snatch whatever and whomever they can, then transporting treasure and food back to their roosts.

Pterafolk have 20-foot wingspans and give birth to live young. Ancient rituals once bestowed upon them the ability to assume the forms of pteranodons and wingless lizardfolk, but those rituals have long been forgotten.

Pterafolk stats can be found in Tomb of Annihilation.

There are HUNDREDS of monsters to choose from to craft a CR 0-1 encounter so if these don’t fit there is bound to be one that does.

D&D Beyond has a “Build an Encounter” option that’s in Beta NOW. This Encounter builder is a great resource to preplan encounters and discover Monsters that you may not have known existed!

The beauty of Homebrew Dungeons and Dragons is building the world of your dreams so go wild and think outside the box. Give your players a sandbox that they’ll talk about for years!

DID YOU ENJOY THIS ARTICLE?

ARE THERE ANY MONSTERS MISSING?

WHAT MONSTERS DO YOU USE IN YOUR CAMPAIGN?

TELL US ALL ABOUT IT IN THE COMMENTS BELOW! 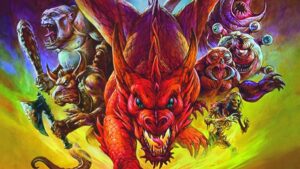