It’s no secret who the undisputed King of Dungeons & Dragons streaming is so the question is who are the best D&D streams that aren’t Critical Role?

Critical Role averages 897,412 viewer hours in a 30-day period According to TwitchMetrics. Not too shabby for a group of “Nerdy Ass Voice Actors”.

The number two show on Twitch, Momo, accumulated 81,908 viewer hours. Now, almost 82 thousand Viewers a month is nothing to sneeze at, but it’s a drop in the bucket when compared to Critical Role.

Tabletop Gaming in general continues its popularity renaissance with no sign of slowing down. Its rebirth began well before the Pandemic but Covid really fueled the ascension of Online streaming. With that came thousands of D&D streamers on Twitch, YouTube, Podcast, and everything in between.

Streaming D&D is a social experience and a chance to connect not just with YOUR group but with countless spectators worldwide.

As expected, there are a handful of streams that separate themselves from the pack. Whether it be charm, unique gameplay, or killer storylines the following shows shine bright and are the best D&D streams that aren’t Critical Role.

High Rollers is a long-standing homebrew D&D campaign set in the unique world of Aerois.

The cast of High Rollers are above all else absolutely hilarious. It is hard NOT to have a good time watching or listening to this show.

The group is led by Dungeon Master Mark Hulmes, who never disappoints with his roleplaying chops. The show has been called the “UK Critical Role,” which fits on the production side, but High Rollers really is in a class all its own.

The show flaunts unforgettable characters and story arcs, but the humor is what makes this stream stand out. High Rollers is in year four of its stream which takes place every Sunday at 5pm (GMT) on Twitch.

The show is also in Podcast form with part one releasing on Mondays and part two dropping Thursdays on Spotify. The full recorded episodes can also be found on the High Roller YouTube Channel.

Dungeons and Daddies is an amazingly well-done podcast. Not enough can be said about the sheer enjoyability factor that oozes from every episode.

The 1st campaign revolved around a group of dads who are pulled into another dimension to rescue their children. The show is quaint and heartfelt while still having plenty of genuine laugh out loud moments.

Episodes of Dungeons and Daddies are released every other Tuesday on Spotify, and the cast is well into season two now. In Season two the grandchildren of the original daddies start their own quest to rescue THEIR Fathers.

Dungeons and Daddies is just a good time, plain and simple. As a Father myself, the emotional moments hit hard, and the corny Dad jokes resonate like only a Dad Joke can.

Not Another D&D Podcast is another fun show with a cast of writers and comedians that a Podcast can barely contain.

The show is high action and high comedy all the time. The stellar storytelling mixed with moments of raw emotion really highlights the talent that the writers and cast of this show have.

The average episode is an hour and a half long which makes the show easy to commit to and more than possible to digest in one sitting.

The strength of Not Another D&D Podcast is how personable each cast member is. It truly feels like listening to good buddies playing D&D in a suburban basement somewhere.

Campaign three launched this year in 2022 with new episodes released Fridays on Spotify.

High Rollers, Dungeons & Daddies and Not Another D&D Podcast are at the upper tier on the popularity chain for D&D streamers and rightfully so. Each show has amassed a large following and continue to see their popularity grow.

What about the smaller shows or the up and coming shows available right now?

The Dungeon Dudes are a different breed of super talented streamer.

Hosts Kelly McLaughlin and Monty Martin have dedicated videos to enhance the game itself by dissecting the Player’s Guides, giving Dungeon Master advice, roleplaying tips, reviews, and in-depth reporting on the world of Dungeons & Dragons 5e.

The Dungeon Dudes also release new episodes of their homebrew extravaganza, DUNGEONS OF DRAKKENHEIM, Tuesdays and Thursdays. The show is available on Twitch with video-on-demand episodes available the following Friday on their YouTube channel.

The standout aspect of this stream are the two hosts Kelly and Monty. They are personable and a wealth of D&D information both in game and out.

The Up and coming show Dice Legenz is an amazing Dungeons & Dragons show from New Zealand. The cast consists of television and stage professionals, including New Zealand TV presenter Ronnie Taulafo (What Now!, The Feed, Take Home Pay).

The obvious thing that sets Dice Legenz apart from the countless other up and coming streams is the engaging and professional cast members. Each of which have acting backgrounds.

A welcoming addition for this new show is the high-quality studio production and amazing storytelling. But what hooked me right away was the exciting, fast-paced, and unpredictable game play.

The adventure takes place in a grand walled city where treachery is brewing. The heroes are four humble town guards that find themselves facing a rising tide of darkness threatening to destroy their city and their loved ones.

The imagination and pure joy that exudes from the cast is palpable from start to finish of each episode. It is full of blink and you miss it hijinks and originality that make each episode a breeze to absorb.

Dice Legenz is an up-and-coming D&D stream with all the tools and star power to elevate it to the next level. Get in now on the ground floor because this is going to be a fun ride! It streams on Twitch every weekend (Sat, 8pm EST / Sun noon NZT) and also releases recorded episodes on the Dice Legenz YouTube Channel.

To Be The Best You Have To Beat The Best… Or Do You?

These FIVE streams shine, each in their own way. They are original, have heart and bring positivity to the TTRPG community.

They are not just the best D&D streams that aren’t Critical Role, in many ways they are the better D&D stream available.

What do you think? Did we miss one of your favorite streams? Tell us below in the comments.

If you enjoyed this article check out more Dungeons & Dragons Goodness HERE! 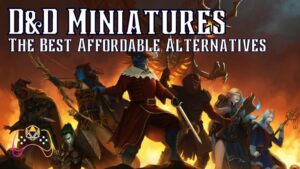