Spirit guardians in 5e is a spell just about every cleric learns when they gain access to it. Why? Because it does solid damage every round, provides excellent crowd control, allows for great chemistry with other abilities and spells, and it lasts 10 minutes. 10 minutes is equivalent to 100 rounds of combat in Dungeons and Dragons.

Spirit guardians in 5e is no joke.

But people often interpret the spell incorrectly and there are always questions surrounding the appropriate use of the spell. So let’s clear those up, give you tips to make the most of spirit guardians, and outline some strategies for countering this incredible spell.

You call forth spirits to protect you. They flit around you to a distance of 15 feet for the duration. If you are good or neutral, their spectral form appears angelic or fey (your choice). If you are evil, they appear fiendish.

When you cast this spell, you can designate any number of creatures you can see to be unaffected by it. An affected creature’s speed is halved in the area, and when the creature enters the area for the first time on a turn or starts its turn there, it must make a Wisdom saving throw. On a failed save, the creature takes 3d8 radiant damage (if you are good or neutral) or 3d8 necrotic damage (if you are evil). On a successful save, the creature takes half as much damage.

At Higher Levels. When you cast this spell using a spell slot of 4th level or higher, the damage increases by 1d8 for each slot level above 3rd.

What is Spirit Guardians in 5e?

Spirit guardians in 5e is a 3rd-level spell used almost exclusively by clerics. It allows casters to deal decent damage every round and slow down enemies across a significant space.

A creature must make a Wisdom saving throw if the creature:

On a failed save, the creature takes:

On a successful save, the creature takes half as much damage.

The downside to spirit guardians is it is a concentration spell. So be prepared to roll Constitution saving throws if you plan or expect to get close to the enemy.

Spirit guardians does not deal damage when you cast it

If you cast this spell when you’re surrounded by hostile creatures, those creatures will not be damaged or slowed by the spell until their turns start.

Alternatively, let’s say you cast this spell and then move toward an a group of enemies so they are within the affected area. Those creatures will not be damaged or slowed by the spell until their turns start.

Remember, the spell description states, “when the creature enters the area for the first time on a turn or starts its turn there, it must make a Wisdom saving throw.“

But we can take advantage of that.

Since each creature has a turn for each round of combat, you can use abilities (i.e., thorn whip, thunderwave, charm) that force a creature to move in and out of the affected area.

You can only identify unaffected creatures if you can see them

If you cast it and a nearby ally is invisible, you cannot identify that ally as unaffected. Therefore, that ally will have to make a Wisdom save on his or her turn and suffer the effects of the spell.

Movement speed of creatures entering and leaving the affected area

Spirit guardians can stack damage but not the speed halving effect

The Player’s Handbook specifies “the effects of the same spell cast multiple times don’t combine” but this is meant to stop spells like spirit guardians from reducing creatures’ movement speed to almost nothing.

If two clerics are standing next to one another when they cast the spell there will be twice as many spirits attacking enemies in the affected area.

With that said, it’s ultimately the DM’s call.

Spirit guardians does not go around corners or pass through walls

What classes can cast spirit guardians in 5e?

Except for paladins who swear the Oath of the Crown, spirit guardians is exclusive to clerics. And clerics who choose the War Domain gain access to spirit guardians as a domain spell when they reach 5th level and can cast it without using a standard spell slot. In either case, you still need the components or a holy symbol.

How do you use spirit guardians in 5e effectively?

Spirit guardians in 5e is ideal for crowd control of small, melee enemies. If you want to maximize damage, position yourself in the center of the enemies. They will be forced to take one of two actions. They will stay in the 15-foot radius, thus risking taking significant damage every round. Or they will flee to escape the spirit guardians damage.

Spirit guardians in 5e centers on the caster, so don’t cast the spell if you’re not expecting enemies to come within 15 feet of you. If you’re trying to stay out of combat, consider casting a different spell or taking a different action. But if you expect the enemy might approach you, then it makes sense to cast it because the spell will last longer than the battle.

Not sure how to handle the cleric who brings forth spirits to protect his party every time initiative is rolled?

Do the type of spirits change the effectiveness of spirit guardians?

The spirit guardians you summon do no change the effectiveness of the spell. But your alignment changes the type of spirits you summon which determines whether they deal radiant or necrotic damage.

Can I choose the type of damage spirit guardians deals?

No, because the type of damage is related to the character’s alignment. If you are good or neutral, their spectral form appears angelic or fey (your choice). If you are evil, they appear fiendish.

What classes other than cleric can use spirit guardians?

If multiple clerics cast spirit guardians, do the effects stack?

The damage stacks from both spells, but the movement will only be reduced to half speed once.

Just about every cleric picks up spirit guardians because of how powerful and useful the spell is. It deals damage that scales. It is effective at controlling crowds of weaker enemies and dealing damage to large enemies every turn. And it lasts 10 minutes. 10 MINUTES! That’s 100 rounds of combat. No fight lasts for 100 rounds. 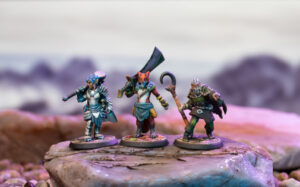