In Dungeons and Dragons 5th edition, the Soulknife rogue is a powerful psionic subclass. Soulknife rogues conjure blades of pure psychic energy, as well as a host of other psionic abilities for combat, skill challenges, and exploration. This makes the Soulknife rogue in 5e a formidable opponent on the battlefield and a master of subterfuge.

The Soulknife rogue in 5e was introduced by Tasha’s Cauldron of Everything and is one of the best subclasses if you want to play a spy or covert assassin.

What is the Soulknife rogue in 5e?

Honor among thieves—unless one thief relies on psychic powers.

Those rogues know what’s up. Would you trust a psychic?

What sets the Soulknife rogue in 5e apart from other archetypes?

Most rogues rely on their physical ability to excel. The Soulknife rogue in 5e relies on a combination of physical and psychic ability.

While a normal rogue wields a physical dagger or short sword, the Soulknife can transform his psychic energy into dangerous blades he can hold and throw. Additionally, he can expend Psionic Energy dice to fuel other abilities, such as teleporting short distances, going invisible, and communicating telepathically.

Abilities and Features for the Soulknife rogue in 5e

You possess psionic energy and use it to fuel your psionic powers. And that energy is represented by Psionic Energy dice. You have a number of d6 dice equal to twice your proficiency bonus.

At 3rd level, you have a proficiency bonus of +2, so you have 4 Psionic Energy dice.

Lastly, the Psionic Energy die changes as you get stronger:

So what about those sweet psionic abilities?

Did you fail an ability check with a skill or tool you’re proficient in? That’s where Psi-Bolstered Knack comes in.

As long as the psychic is active, the creatures you linked with can speak to you telepathically and vice versa. Communicating doesn’t require a standard or bonus action. But you and the creature you’re trying to communicate with must be within 1 mile of one another.

In addition, it doesn’t matter if you and a creature don’t have a language in common with one another. However, a creature cannot communicate with you if the creature cannot speak any languages. And any creature can sever the telepathic link at any time without using a standard or bonus action.

This is an incredible ability to acquire at 3rd level. You can communicate with multiple creatures for several hours over a mile and you can do it for free once per long rest. This is perfect for infiltration schemes, heists, and traversing dungeons where it would be ill-advised to talk out loud.

When you take an Attack action you focus your psionic energy into your free hand as a blade of psychic energy extends from it ready to cut down your enemies. Then you can use a bonus action on the same turn to create a psychic blade with your other hand if it’s free.

The first psychic blade is a simple melee weapon with the finesse and thrown properties. If you decide to throw it, it has a normal range of 60 feet but no long range. Whether you throw it or land a melee attack with it, the psychic blade deals psychic damage equal to 1d6 plus your ability modifier (whichever ability you used for the attack roll).

The second psychic blade has identical properties as the first except it deals psychic damage equal to 1d4 instead of 1d6.

You can make a melee attack with one blade and a ranged weapon attack with the other. Mix and match. Variety is the spice of life.

Your psychic blades dissipate after you attack regardless of whether the attacks are successful. And the blades leave no scarring or physical damage on whatever they make contact with because the damage is psychic.

Psychic blades make the Soulknife rogue in 5e one of the best subclasses for heists and infiltration missions that involve busy venues. If there’s a good chance guards at the door will confiscate any weapons you bring in, you can leave your weapons behind without hesitation. Plus, in an assassination you won’t leave behind any evidence on the victim’s body because the blades don’t leave scarring and you won’t risk dropping them for someone to find a murder weapon.

Your Psychic Blades receive an upgrade from the growing psionic power of your soul, turning them into Soul Blades. Your Soul Blades grant you the following abilities:

Psychic Teleportation—Use a bonus action to conjure a psychic blade that you throw. Roll and expend a Psionic Energy die blade. Whatever number you rolled on the Psionic Energy die results in you teleporting that number times 10 feet in the path of your thrown blade. Then the blade vanishes.

You roll a Psionic Energy die and get a 2.

That means your blade hits the wall 30 feet away from you and above the other balcony, teleporting you to the wall so you can drop down onto the balcony.

Psychic Teleportation is great ability for increasing your mobility as a rogue. Now you can hop around a battlefield and escape deadly confrontations without triggering an attack of opportunity.

Now you are able to manifest your psionic energy into a veil that surrounds your body, preventing other sentient life forms from being able to see you.

Use a standard action to turn yourself and anything you’re carrying/wearing invisible. Your invisibility lasts for one hour or until you end it. Ending the effect early requires no action, but it will end once you do damage or cause a creature to make a saving throw.

You can use this ability once per long rest. Alternatively, you can expend a Psionic Energy die to use it again.

Amplify your Sneak Attack damage with Psychic Blades and strike the creature’s mind, forcing the target to make a Wisdom saving throw.

The DC of the save is equal to 8 plus your proficiency bonus and your Dexterity ability modifier.

If the target creature fails the save, the creature is stunned for 1 minute. The creature repeats the saving throw at the end of the creature’s turn. Once the creature succeeds, the stunned effect ends.

Like other abilities, you can use Rend Mind once per long rest. But you can expend three Psionic Energy dice to use it again.

Any feature or ability that improves a rogue’s ability to deal Sneak Attack damage is always welcome. And being able to stun a creature for a full minute will come in handy considering most fights don’t last a full minute (10 rounds). Lastly, the DC is tough. By 17th level, your rogue has a proficiency bonus of +6 and a Dexterity ability modifier of (hopefully) +4 or +5. So a target creature would need to succeed on a Wisdom saving throw of at least 18.

Tips for the Soulknife rogue in 5e

How do you connect a Soulknife rogue in 5e to the party?

Soulknife rogues make some of the best spies in the Forgotten Realms. So if your adventuring party is in need of espionage or skullduggery, a rogue that carries his weapons in his mind, can turn invisible on command, and communicate telepathically to his allies is a powerful addition to an adventuring party.

Maybe your Soulknife was living among a group of psychics training to harness their abilities. Maybe you pretend to be a normal rogue and only reveal your Psychic Blades as a last resort so as not to reveal your identity among people who won’t take kindly to a Soulknife in their midst.

Which race should you choose for a Soulknife rogue in 5e?

You chose the rogue class and you’re playing 5e, so you need Dexterity. Beyond that, the Soulknife doesn’t rely on other ability scores. If you want to play it safe, look at races which offer bonuses to Constitution in addition to Dexterity.

The Soulknife rogue in 5e is one of the best subclasses for the rogue. Soulknife rogues are incredibly powerful and have a lot of great abilities. Their Psychic Blades are some of the most useful weapons in the game and their ability to turn invisible and teleport make Soulknife rogues very hard to catch.

If you’re looking for a subclass that is strong in offense and defense, dominating ability score rolls, and subterfuge, the Soulknife rogue is a great choice.

What do you think of the Soulknife subclass? What would you change, if anything, about this subclass to make it better? Let us know in the comments! 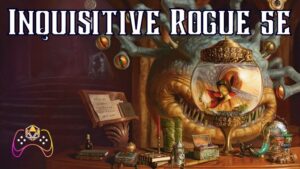