A New Party Arises in Dungeons & Dragons: Honor Among Thieves.

The trailer for a new Dungeons and Dragons movie dubbed Honor Among Thieves emerged at San Diego Comic Convention (SDCC) on Thursday (7/22). The 2000 adaptation of the world’s best Roleplaying game is still an unhealed wound with many fans of D&D so buy-in on this newest installment has been tepid at best.

Honor Among Thieves played the part of Hollywood Blockbuster with a Hall H debut of the cast, characters, and trailer at SDCC. Parent Companies Paramount and Hasbro also hosted an off-site “D&D Tavern” showcasing the upcoming film. This push toward legitimacy is churning renewed hope among fans. But is it warranted?

The official studio description for Dungeons & Dragons: Honor Among Thieves details the movie as such:

“A charming thief and a band of unlikely adventurers undertake an epic heist to retrieve a lost relic, but things go dangerously awry when they run afoul of the wrong people. Dungeons & Dragons: Honor Among Thieves brings the rich world and playful spirit of the legendary roleplaying game to the big screen in a hilarious and action-packed adventure.”

The film is produced and distributed by Paramount Pictures and Hasbro. Hasbro made headlines in 2022 by obtaining rights to the game and the groundbreaking digital game-play Website D&D Beyond. Hasbro is also working on other film and TV adaptations for its most popular toy lines including Transformers and My Little Pony. BUT this is an article about Dungeons & Dragons so let’s roll the initiative and establish Marching Order.

The Adventurers Meets in a Tavern

Dungeons & Dragons: Honor Among Thieves revealed the names and classes of the core characters of the movies during their Hall H panel at SDCC. Paramount Pictures also officially revealed the character names for Dungeons & Dragons: Honor Among Thieves. This is a great first step for fans and establishes a hefty chunk of meat to gnaw on until the movie comes out in 2023. Let’s dive in head first to put some familiar Hollywood faces to their Forgotten Realm counterparts:

Chris Pine is a Bard named Elgin. Elgin wears a Harper pin in several scenes in the trailer, hinting that he might be part of the notorious organization.

Michelle Rodriguez is a Barbarian named Holga. She plays the muscle in the trailer and does so with convincing ease!

Rege-Jean Page is a Paladin named Xenk. One stand-out scene is the showdown with the “Chubby” Red Dragon… Could this be THE gluttonous Red Dragon THEMBERCHAUD that appeared in Out of the Abyss for Fifth Edition D&D? (Fingers Crossed!)

Justice Smith is a Sorcerer named Simon. The table is set for impressive CGI cantrips and spells

Sophia Lillis is a Druid named Doric. Doric is a tiefling with a tail and an apparent ability to Polymorph into a Monsterous Owlbear. (Before you “Uhm Actually” types start in – Let’s wait for more details before we try to “correct” any perceived errors in D&D mechanics or Lore.)

Hugh Grant is a Rogue named Forge. Early reporting on the movie details him as Forge Fletcher. Game Master of the Neverwinter Arena.

Setting The Stage for a Larger World

The Paramount trailer for Honor Among Thieves spotlighted multiple iconic Forgotten Realms locations and several amazingly satisfying D&D monsters. The movie trailer features an acid-spewing black dragon, the aforementioned Chubby Red Dragon, and a Beautifully rendered White Dragon. There were also fan favorite Monsters such as a mimic, an owlbear (Druid Doric’s alter ego), a displacer beast, and a gelatinous cube. That is quite a list of Beasts considering this is the FIRST trailer for a movie that is still over SEVEN months away!

Keen fans of D&D also enjoyed a cinematic look at the Underdark, the city of Neverwinter, and what could be the area of Icewind Dale.

Early Impressions of The Sword Coast

As mentioned above, the trailer delivers the dragons. Some of the most iconic Dungeons and Dragons Monsters around make a cameo in the trailer. It is still early in the process but its fans may have also gotten glimpses at the Underdark, Heat Metal spells, Dimension Door spells, and Iconic terrain of The Sword Coast.

It’s clear that this version of Dungeons and Dragons is led by people who play and respect the source material!

The new Dungeons & Dragons movie is helmed by John Francis Daley and Jonathan Goldstein of “Game Night” fame. The movie hits theaters on March 3, 2023. Hopes are high as the Directing Duo also acted as scriptwriters for Marvel’s “Spider-Man: Homecoming”.

Dungeons and Dragons: Honor Among Thieves is visually spectacular with a rocking trailer set to Led Zeplin. How bad ass is that?

It has humor, heart, great CGI, and isn’t shying away from some much-deserved Fan Service.

It will be interesting to see how/if Hasbro ties the Movie release to in-game options, modules, or miniatures. The SDCC succeded with its persuasion check and firmly has an entirety of the attention of the fanbase!

What do you think of the Dungeons & Dragons: Honor Among Thieves trailer?

Will you be watching the movie in theaters?

While you’re here go ahead and check out some of these other Nerd Night News D&D Articles!

Cool Articles – LIKE THIS ONE – Unique D&D Tips to Make Your Character a Hollywood Star. 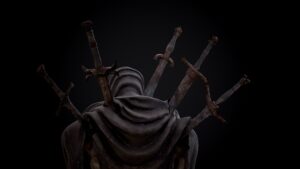