D&D is set to make a Triumphant return at SDCC

San Diego Comic-Con (SDCC) is BACK in 2022 after a 3-year absence and there are a ton of exclusive D&D events planned! D&D fans will have everything from a Hall H appearance, Exclusive Collectables, Live Play, and even an Off SIght event to choose from.

Dungeons and Dragons: Honor Among Thieves in Hall H

Paramount Pictures will lead the charge with the FIRST Hall H panel of 2022 on Thursday, July 21 at 12pm PT to offer a first look at Dungeons & Dragons: Honor Among Thieves. The film’s “cast and filmmakers” are scheduled to appear for an exclusive sneak peek at the upcoming movie Dungeons & Dragons: Honor Among Thieves. All Hall H panel attendees will also receive an exclusive, collectible poster. How freaking cool is that?

The exact cast members in attendance are unknown, but Dungeons & Dragons: Honor Among Thieves stars Chris Pine, Michelle Rodriguez, Justice Smith, Regé-Jean Page, Hugh Grant, and Sophia Lillis. The fact that a D&D movie is getting center stage (Hall H) at SDCC is a HUGE deal and gives hope toward the quality of the film.

In a recent interview with IGN, the film’s Producer Jeremy Latcham stated “I could not be more thrilled to kick off the return to Hall H with Dungeons & Dragons: Honor Among Thieves. I’m excited we get to share the film’s incredible and fun world in person with the amazing fans who make San Diego Comic-Con so special.”

For those who have never attended a Hall H Panel prepare for a LONG line. So make a plan in advance and get to Hall H early to make sure you get in!

An Off-Sight Option for D&D Nerds

Don’t have a badge for SDCC 2022? That’s alright because there is some D&D goodness planned outside the convenion center as well. Paramount Pictures is bringing Dungeons & Dragons: Honor Among Thieves to life with an off-sight Tavern Experience.

Visitors will take a 20-minute immersive tour that includes photo ops, exclusive prints from Bosslogic, and a chance to sip on Dragon Brew (alcoholic and non-alcoholic available). You will also get a chance to interact with a few fan-favorite Dungeons & Dragons creatures and characters.

Keep a close eye on the film’s Social Media sights as an RSVP launch will be announced “soon”. There will also be a stand-by line at the event but who wants to wait in line when you could be chugging on some DRAGON BREW!

These action figures are 4” scale, authentically reproduced to match the original prototypes for the D&D Cartoon that never saw release. The Characters Pulvereye, Skylla, Kelek, and Valkeer are included in this exclusive set. For those brave enough to open the packaging (blasphemy!) they will find that each figure is fully posable. Pulvereye, Kelek, Valkeer also feature “Battlematic” action!

Each figure will come on an individual blister card just like the original figure line and packed in an outer logo box. The images for these figures bring back a flood of nostalgia and are a must-have for collectors.

The NECA action figures are convention exclusives so if you want to add these bad boys to your dungeon you will need to act fast and make a battle plan.

Prepare for some Dungeons and Dragons – Critter Style

Critical Role will have a panel and Q&A at SDCC 2022. This is a Big deal and should be a HUGE draw for all D&D fans.

Here is the official release from the Critical Role Crew:

“Join the cast of Critical Role (sadly minus Sam Riegel) for an hour-long Q&A style panel on July 23rd, 2022 in Ballroom 20 at 5:00 PM Pacific. Our friend and fellow Critter, Christian Navarro will be our moderator as the cast answers everyone’s burning questions! We are so excited to see you all in person again – and don’t worry, if you can’t join us live we’ll be sharing the panel on YouTube on July 28th at 10 am Pacific.”

Ballroom 20 isn’t as large as Hall H but is still HUGE. Expect long lines to get in and plan carefully as this panel will most definetly reach capacity quickly.

A Live Play of Spelljammer with Wizards of the Coast

Wizards of the Coast’s Legends of the Multiverse is also having a panel. This will be a 3-hour live play of the Spelljammer campaign. It takes place Friday, July 22, 2022, from 10:00 AM – 1:15 PM. It takes place at the Omni Grand Ballroom ABC, 4th Floor, Omni San Diego Hotel.

Here is a description from the SDCC Program Page of what to expect:

If you’re not able to make it have no fear! Nerd Night News will be on sight and delivering all the exclusive D&D events from SDCC 2022 across our Socials. SO STAY TUNED!

Are you attending SDCC 2022? What are YOU looking forward to?

Want to know more about the upcoming Dungeons and Dragons goodies? Check out some of our past articles… LIKE THIS ONE – The New D&D Starter Set: Dragons of Stormwreck Isle 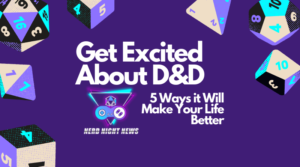